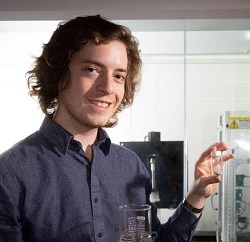 Communities around the world face increased disruption to critical electricity and potable water infrastructure due to natural disasters that are becoming more frequent and potent due to climate change. At the same time, many such communities see their local ecosystems being polluted, especially as debris from severe weather events causes waste streams to surge in volume. Instead of compounding the issue, what if debris and other refuse could be converted into clean fuels locally to power the generation of critical resources when they would otherwise be inaccessible? Aluminum, for example, is cheap and energy dense (23 kWh/L, 8.6 kWh/kg), but global recycling rates are limited by complications with sorting waste by alloy content, lack of economic incentives, and restrictions on waste exports to other countries. Consequently, several million tons of aluminum are landfilled each year in the US alone, leaving significant potential energy sitting idle and unused. In this talk, I will discuss my research on the science and engineering of transforming practical scrap aluminum into a water-reactive fuel for clean hydrogen generation using a fully recoverable and recyclable liquid gallium-indium catalyst. I will also discuss several devices I have developed to utilize this fuel to generate electricity at the kilowatt scale, as well as desalinate seawater.

Peter Godart is a postdoctoral researcher and educator at MIT in the Department of Mechanical Engineering and is working to develop carbon-free and equitable energy solutions for climate change adaptation and mitigation. He holds BSc degrees in mechanical and electrical engineering and an MSc and PhD in mechanical engineering from MIT. After earning his bachelor’s degrees in 2015, Peter spent two years as a research scientist at the NASA Jet Propulsion Laboratory, where he worked daily operations for the Curiosity Mars Rover, qualified hardware for the Mars 2020 Rover (Perseverance), and led a research team in the development of structural aluminum-based fuels for a lander that may one day go to Europa, one of Jupiter’s icy moons. For his doctoral work, Peter developed new ways of extracting energy from aluminum waste to power electricity generation and seawater desalination in the aftermath of natural disasters. His current research interests include probing the fundamental nature of metal-water reactions at the molecular level, waste-to-energy for clean hydrogen production, and the development of devices capable of using hydrogen gas to power the generation of critical resources off the grid.  In addition to his research, Peter has served as an instructor for one of the capstone mechanical engineering design classes at MIT, teaches thermodynamics to high school seniors from underrepresented and underserved communities through MIT’s Office of Engineering Outreach Programs, and is leading efforts to update core engineering curricula at MIT to incorporate sustainability and ethics alongside the technical content. Outside academia, Peter is also an avid jazz pianist and composer and has traveled the world using music as a bridge to both educate and learn from communities impacted by the climate crisis.