Welcome to the Physical Science and Engineering Division

Our mission is to create knowledge pertaining to matter at all scales - nano, meso and macro - and in all forms, from bulk, to divided colloids and fluids: as well as to create knowledge about the interaction of matter with external stimuli in order to design new materials and technologies that can address our quest to mitigate or even solve some of the major challenges that we face in the world today.

Our graduate students and internationally renowned Faculty focus on challenges related to energy and the environment.  We also focus on exploration and manipulation at the nanoscale.

PSE boasts superb facilities and resources and I invite you to explore our website. 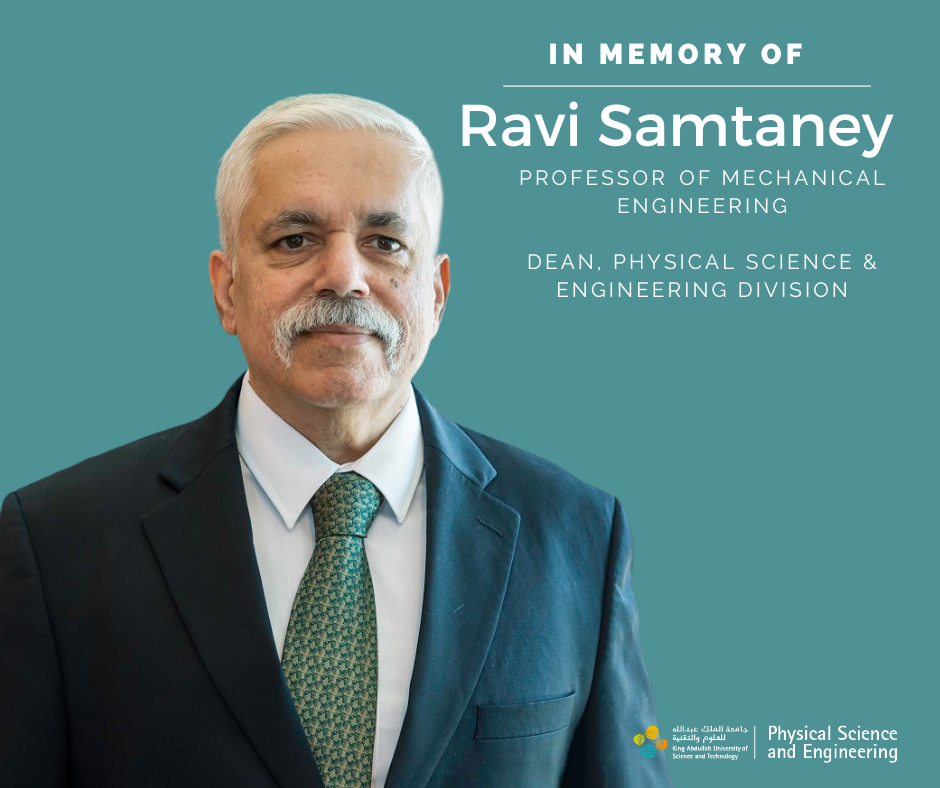 In Memory of Ravi Samtaney

It is with immense sadness that the KAUST Physical Science and Engineering (PSE) Division announces the passing of Professor Ravi Samtaney, 58, Dean of the PSE Division. Ravi passed away suddenly of a heart attack earlier this week in South Carolina, U.S.

Professor Samtaney was a leader of great resolve combined with a limitless love for people, passion for science and unwavering integrity. Despite his past health condition, he continued to offer his work and dedication to the University and its students and inspired us all with his enormous dignity and sense of humor.

Born in 1964 in India,  Ravi began his scientific career as an experimentalist but switched to computational work after obtaining a master’s degree in Mechanical Engineering. He obtained his Ph.D. in Mechanical and Aerospace Engineering from Rutgers University, U.S., in 1993. Following his Ph.D., Ravi worked as a postdoctoral fellow at the California Institute of Technology (Caltech), U.S., in applied mathematics and aeronautics.

A highly respected academic—whose work experience included several years at Caltech as a research faculty in applied mathematics and as a scientist at NASA’s Ames Research Center—Professor Samtaney conducted research at the intersection of applied mathematics, physics and engineering to investigate the fundamental processes of fluid mechanics and plasmas using numerical methods and large-scale computing.

Among his numerous academic achievements was the development of a simulation code with his colleagues at Caltech that accurately reproduces experimentally observed turbulence fields for high-speed applications. The code overcame one of the major roadblocks preventing the expansion of the present predictive capability for engineering fluid dynamics simulation.

As a professor of mechanical engineering at KAUST, he was exceptionally popular among his students, who saw in him a beacon of scientific research and humanity. He nurtured and helped pave the career paths for hundreds of young scholars now pursuing leading scientific careers worldwide.

As PSE Dean, he identified strongly with KAUST’s core mission. He contributed to shaping a new generation of Saudi researchers and academics, promoting interdisciplinary discussion, and ensuring women’s access to science.

His leadership has been fundamental in guiding the PSE Division through challenging times, notably the University’s pioneering first decade and, recently, the Coronavirus pandemic.

Ravi’s memory will live on in the hearts and minds of his many friends and colleagues and the generation of students he inspired with his enthusiasm and incredibly bright mind.

Please post your comments in the section below to share your condolences and memories of Professor Ravi Samtaney.

Your email address will not be published. Required fields are marked *

​​​The Physical Science and E​ngineering Division currently offers seven degree granting programs.  Guided by their advisors, students may choose courses and devise research projects that best suit their individual goals.  Students can take full advantage of the interdisciplinary research​ opportunities that arise from across KAUST's fifteen academic programs, the three Divisions and our industrial partners.
In all programs students are offered modules consisting of lectures, seminars and laboratory classes.  Students are expected to conduct independent research.​
For more information, explore our Academic Program pages through the Links below:​